MiniGrant:
Technofeminist camp combined with the construction of an Internet network for the Kopacze-Diggers collective

“Our unwritten motto is to technologize feminism, feminize technology”

FORK – Feminist Organization of Radical Clicking – is a grassroots group operating on the borderline of feminism and technology. Its members deal with technologies (computer science, physics, mechanics, crocheting) on a daily basis, which is associated with the experience of symbolic, verbal, or infrastructural discrimination. From an early age, men are taught that they will somehow “naturally” manage information technology, women+ are denied these competences. At the same time, feminized technologies such as textiles are not valued in society.

“During the camp, we will show how complex undervalued feminized non-computer science technologies (e.g. textiles) are and how much they connect with computer science” 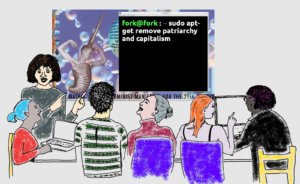 As part of the MiniGrant, FORK members will organize a three-day mini-feminist camp. During the camp, workshops, and discussions on the relationship between patriarchy, capitalism, and information technology will be held by the participants.
The site of the camp will be the queer activist and residential space of Kopacze-Diggers. Before the camp, FORK will build a local network, which is necessary for conducting such an event. In addition, building your own network and server will show how independent women+ can be. The infrastructure will remain in Kopacze-Diggers to serve the collective and other groups visiting the place.

Grant amount: PLN 4 900
Graphics from the group’s own materials