Let’s save the ravines of Kleszczow

“We are faced with allegations that our statements are emotional, not substantive. Rumors say that they call us “girls from Kleszczow””

Let’s save the ravines of Kleszczow is a women’s initiative for the protection of valuable forests in Kleszczow near Kraków against felling. The group organizes workshops and nature walks for children and adults, conducts natural research, and inventories, and submits applications for the creation of various forms of protection. In the course of their activities, the activists experienced gender-based discrimination. At the same time, they noted that in the area of their activities, they cooperate mainly with men – they miss the participation of female scientists, biologists, and educators.

“Activities focused on nature conservation and being in nature are conducive to rapprochement, establishing deeper relationships, and finding equality. We would like to draw power and knowledge from nature” 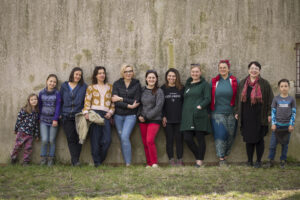 The collective decided to address gender inequality issues in the context of nature and forest protection. The planned activities include, among others, natural research carried out by female scientists; meetings with a biologist, women’s power circles, or herstoric meetings. The members of the initiative will also supplement the library of the village cultural center with equality literature and the subscription to “Kosmos dla dziewczynek” (a magazine for girls).
The group hopes that they will inspire girls and women looking for their professional path, show them that they can be researchers or discoverers.