MiniGrant:
Meeting with a gynecologist and psychologist for teenagers and young women from rural areas, preparation of first menstrual sets and a film about women co-creating the Wronianki Village Housewives’ Association

“Each of us has a job, a passion, and dreams”

“Wronianki” is co-created by 45 women living in rural areas, aged 25-65. The Association was created so that women could leave their houses and get to know each other, so that they could develop and support each other. The motivation was also not to discriminate against women living in rural areas, both on the basis of gender and place of origin. As adults, the members of the VHA want to support teenagers and young women in such thinking.
“Wronianki” want to disenchant the formula of the Village Housewives’ Associations, which, in their opinion, arouses indulgent smiles and is associated with the past – they show that they are modern housewives and do not agree with the stereotype of women living in the countryside.

“We want to show our strength. The power of the housewives of the Stara Wrona” 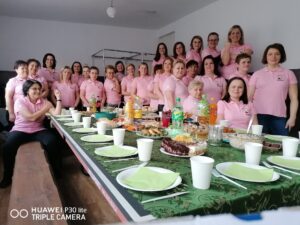 As part of the MiniGrant, the Association will organize a meeting with the Pink Box for teenagers and young women from rural areas. During the meeting, the participants will talk about menstruation, femininity, sexuality, discrimination, and self-esteem. “Wronianki” will also prepare a set for first menstruation for every participant, consisting of hygiene articles and publications on the topics discussed.
Wronianki will also record a short film – a story about the creators and members of the Association, and the summary of the activities will be a banquet with a premiere of the film.

Grant amount: PLN 4 600
Photograph from the group’s own materials