“Teenagers, due to their seemingly “difficult” nature, are marginalized and left to their own devices, and we wish to reach them”

The DAUGHTERS collective was formed because its members noticed that a particular group – teenagers – were sometimes overlooked in projects addressed to girls. The collective conducts development activities and supports teenage girls, and its activity is concentrated around the DAUGHTERS platform (www.cory.com.pl). The platform works in line with the idea of “girls support girls”, and through it teenagers have access to workshops run by women who want to share their world. Empowering content also appears on the DAUGHTERS’ social channels.
The collective wants to create a safe space where every DAUGHTER can feel accepted regardless of their gender identity, property status, or origin.

“In the era of the personality cult, we want to show teenagers that doing collective works brings a lot of meaning and joy and gives them the opportunity to feel a community” 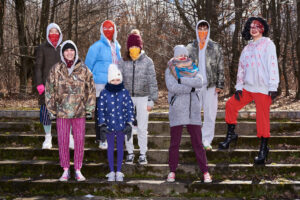 The collective will prepare the first edition of the DAUGHTERS zine, which will be published in free, electronic form. Th zine will be created by and directed to DAUGHTERS, which means launching a new channel of reaching teenagers, at the same time involving them in creating a joint project. It will address, among others, the subjects of feminism, diversity, and self-esteem. There will also be interviews, surveys, and recommendations of cultural activities.