Association For the Earth

For years, the association has been supporting women refugees living in Centers for Foreigners in the Lublin region and outside the centers. Recently, the Association has focused on strengthening the emancipation aspirations of refugees, developing their competences, and supporting independence. In 2018, members of the Association, together with refugees from Chechnya, set up an art and craft studio, which they called the Women’s Meeting Club. Not only do they work in the studio, but most of all they meet, discuss, make decisions, and conduct workshops for women and girls.

In response to two crises – the social and political crisis in Afghanistan and the humanitarian one on the Polish-Belarusian border – the studio turned into an aid location. This is where things are collected for the Afghan community and distributed further as needed. Material aid is just the beginning – it is followed by emotional and psychological support. 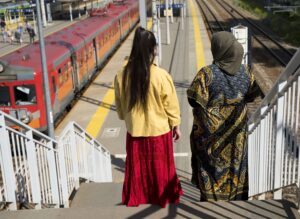 “We want to influence the [feminist] movement by hearing and broadcasting the voices of these persons – refugees from centers in the provinces, who are often invisible, in the shadows, in their rooms in centers for foreigners, or in private rooms in small towns. Voices which are assessed by the broadly understood society through the prism of political decisions, prejudices, manipulation and disgusting decisions” – declare the members of the Association. In its activities for refugees, the Association cooperates with university students, with the Village Housewives’ Association, with the local Active Women’s Clubs and with the Pink Box against menstrual poverty.

“We want to be able not to worry about basic needs,” say the members of the Association. From the Empowerment Grant, they will cover the coordinator’s remuneration, the costs of the accounting office and transport, as well as the costs of communication and promotion of their activities, including the recently opened refugee handicraft shop.

The Empowerment Grants in 2022 were co-financed by the Federal Foreign Office as part of the project “Civil society dialogue – including all voices”, implemented jointly with filia.die fraunestiftung.